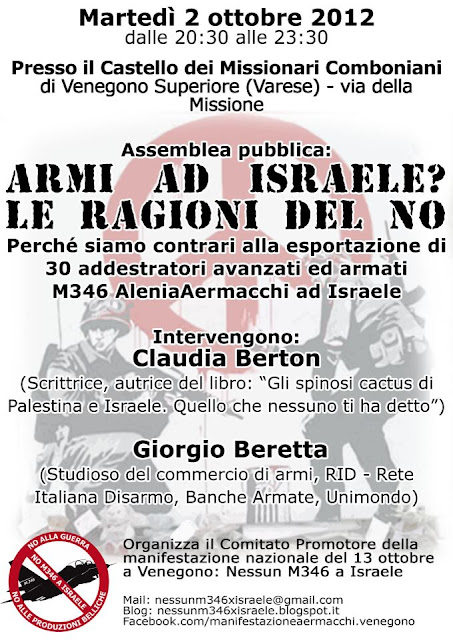 Stop the War Machine, No M-346 or any other weapons to Israel
October 13, 2012, National Demonstration at Alenia Aermacchi Headquarters, Varese, Italy

On Saturday, October 13, 2012, a national demonstration will be held in Varese, Italy, where most of the country’s military aircraft production is located, to denounce the weapons industry, in particular the sale of 30 M-346 trainer jets to Israel. The protest will take place at the Alenia Aermacchi headquarters, manufacturers of the M-346 and part of Finmeccanica Group, one of the world’s top weapons producers.

The M-346, defined as a "technologically advanced trainer jet," is in fact designed to be armed with missiles or bombs. These weapons will undoubtedly be “tested” first and foremost on Palestinians. As a trainer jet, the M-346 is designed to prepare fighter pilots in the use of the most “technologically sophisticated” attack aircraft, such as the "netcentric" and "invisible" F-35 from US weapons manufacturer Lockheed Martin. Israel has signed on to purchase 19 F-35 fighter jets, with an option for 56, and Italy is also unfortunately in line to purchase the combat aircraft for future wars.

Recently, Israeli Foreign Minister Avigdor Lieberman stopped off at Alenia Aermacchi headquarters near Varese during his semi-secret tour of Italy, which was soon followed by the signing of the M-346 contract.

Local and national politicians, from center-left to center-right, have promoted the deal, conveniently “overlooking” the December 2008 - January 2009 “Operation Cast Lead", which saw Israel’s "air power" rain down on the unarmed civilian Palestinian population, killing 1400, of which 400 children. A brutal military action, in which Israel used new unknown weapons as well as those already prohibited by international conventions (white phosphorus, DIME bombs, depleted uranium) and committed war crimes and crimes against humanity as documented in the UN "Goldstone Report".

In addition to halting the sale of M-346 jets to Israel, the demands of the demonstration include suspension of the military cooperation agreement between Italy and Israel signed in 2005.

In recent years, local groups in Varese have denounced the chronic dependence of their territory on war production, organizing assemblies and protests against Agusta Westland (helicopters) and Alenia Aermacchi (aircraft) and, more recently, the F-35.

The demonstration also calls on workers at AleniaAermacchi and all weapons producers to rejects employment based threats and to work to convert factories from producing instruments of death to socially beneficial and environmentally friendly products.

Moreover, local groups have called this national demonstration in opposition to the practice of war, which has intensified over the last 20 years, where military action is called "peace", justified as an instrument of "preventive security" and to "export democracy", and even defined as "humanitarian."

"Humanitarian war" is instead an oxymoron: war causes nothing but death, injuries, destruction, generating hatred, resentment and revenge, it is the most inhumane act imaginable.

There will never be peace as long as the most profitable industry is that of producing weapons and instruments of death.

Endorsements and statements of support can be sent to: nessunm346xisraele@gmail.com 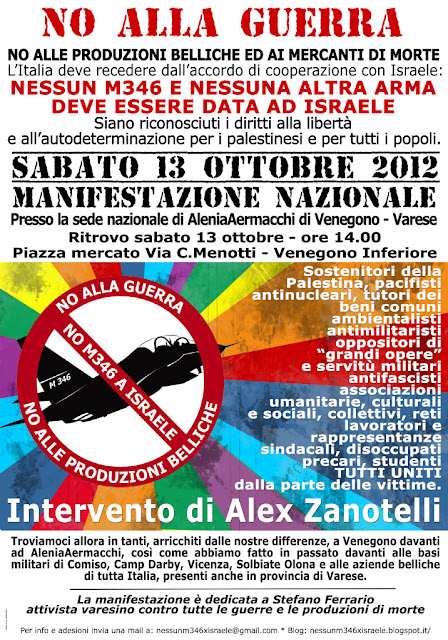 ADESIONI & VOLANTINO NO M346 a Israele